items in your cart

Sensible Yacht Cordage, Exclusive Distributor in the US for Lanex Yachting Ropes, the best lines you are going to love! 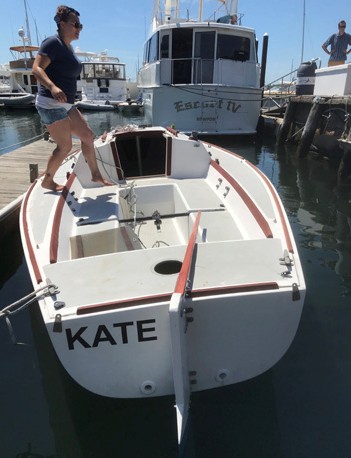 Patient and regular readers will recall my observations on the Community that is sailing. The difference in arriving in a town by car or by boat is vast. Newport is fortunate in that all of the folks in the sailing game basically respond the same way. “Oh, that broke? Well, I have a size-three, double-flange, left-handed framus-dingus, with low hours in it, that will work if you want it…call me.” Happens all the time, right?

Kelsey Britton, an instructor at the IYRS School of Technology & Trades, steps aboard the lovingly restored Kate.   © Joe Cooper/joecoopersailing.com

Last winter, I wrote a couple columns on this topic about a Kaper involving a weary J/22, Newport Yacht Club’s ownership of same, their desire to bring it back to useable condition, and Cooper pulling together a few folks in the local Newport sailing community to complete this restoration, ideally for short money. One of my basic premises in thinking through this Kaper was this strong sense of community that sailors have. Well, waddya know, it worked…

To recap: Newport YC accepts donation of a J/22 that needs some serious work. Right down the street is one of the world’s premier marine trades instructional centers, IYRS. They have a composites class. Kelsey Britton, a third-generation boat builder, is an instructor who said, “Yup” when the idea of having her IYRS composites students get some real-world experience rebuilding said J/22. The boat was hauled in early 2018 and first parked at Maritime Solutions (MSI), “The Inflatable Guys,” owned by NYC member Dick Cromwell (Thanks, Dick!) in Portsmouth. It was there in early February that the boat was first really surveyed and inspected to determine the scope of work (just what exactly Kelsey had said “Yes” to) to be undertaken. Measurements were taken, discussions on the work with Jon Bixby, Chairman of NYC’s Junior Sailing Committee, and Barry Ripley, Minister of The Boats, at the club. Weather came and went, work started and stopped in between weather, and ultimately the boat was moved down to Newport.

The final part of the work was done in the side yard of a NYC member, Dan Sweeney (Thanks, Dan!) This happens to be just around the corner from Chez Cooper, so I got into the habit of walking Annabelle, the Wonder Dog, down the street on her afternoon walks. The 22 was on a trailer, in varying states of repair. The Big Job was to replace the main bulkhead, which is part of the (deck-stepped) mast carrying structure and provides the landing for the chainplates.

Now, fixing a composite boat in Newport is a bit like having yer car serviced. Respectful of pilfering too much of the IYRS materials, enter one Dan O’Connor. Dan wears several hats around town, and the one he was picked for in this Kaper was composite material. Fortunately, Dan works for Jamestown Distributors (OK, they are in Bristol so not technically part of the Newport Marine Mafia, but certainly associate members). Dan is the composites materials sales rep for the IYRS account at Jamestown Distributors. As the line in the Monty Python Sketch goes, “Nudge, nudge, wink, wink…’

And so, to the players. In another 2.684 degrees of separation moment, one of the young lads, Kevin, is a contemporary of my son, having gone to the same grade school in Newport. He is (was; he graduated) a student in the composites class, as was Jake. Not in the class but having been the guy who put me in touch with Kelsey, Chris, a proper Naval Architect from U. Michigan, came along at the end to lend a shoulder. In the Sweeney Boatyard there were, at any time, three of four people including IYRS students Jake Waddicor and Scott Bancroft, all beavering away, doing boat building things. I went around one afternoon and could not help but get a chuckle out of the most critical elements in Klan Kaper Boat Building events: Pizza and Beer, with the pizza box on the grass, driving poor old Annabelle nuts. Regardless, the Kaper had a boatyard dog, too. It is remarkable what an orbital buffer with some gritty cutting compound can do to make an old girl look sporty again. In the two days between one visit and the next, the boat went from looking a bit, well how to put it, scuzzy, to looking like a pretty nice, 30-year-old, white fiberglass boat. I am just glad it was not me wielding the orbital buffer.

The waterline definitely showed where the boat had been sitting, when in the water, and that had all gone away, the old striping at the boot top was gone due to the endless patience of Chris steadily plying a heat gun, with a side order of scraper, at the waterline. And then there was the rig. Thirty-some years can be hard on painted aluminum spars if not exposed to some baseline level of love and care. Enter Jon Bixby. I saw Jon at the boat on several occasions, head down, stern up and muttering some well-seasoned sailor-type oaths directed at stainless steel fasteners introduced into an aluminum spar with no “goo” on the threads. Then there were the old outhaul and halyards and what have you, with weather-worn and mildewed knots. Fortunately, another club member is the proprietor of Sensible Yacht Cordage, in Jamestown. OK, Jamestown is off (Aquidneck) Island too, but he gets an assist for helping out the Newport YC Junior Program. I should also mention here, that, wearing one of my many hats, I was able to procure a new main and jib courtesy of Quantum Sails.

Fortunately, the backstory to the use of the boat is actually pretty easy to keep in mind. It is another Cooper Favorite, Junior Sailing. Newport YC was an early adopter, a few years ago, in the move away from the performance-centric approach of most summer sailing programs and towards inculcating in the Padawans the idea of sailing as a lifelong thing that is fun, adventurous, very social (critical for young kids) and more – way more – than merely winning races.

This forward-thinking approach was shepherded along by Kate Wilson, then Program Director at the club. Kate was also, at the time, the coach for Rogers High School in Newport, then sailing out of Newport YC, the Rhode Island high school sailing league rep to NESSA and God knows what else, all mainly revolving around getting kids onto the water. Kate’s most recent Kaper was as the Press Officer for Vestas 11th Hour Racing, chasing the U.S. boat around the world in the just-completed Volvo Ocean Race. Kate introduced at Newport what has generally become known as Adventure Sailing; programs that are: sailing, fun, exploration and (of course) adventure-centric, often including a sail to Jamestown to get ice cream. Enter the J/22.

Come the sunny days of June and the dismissal of school for the summer (wasn’t that an Alice Cooper – no relation – song?), the boat was delivered to the club. Looking much more like a “ready to go sailing” boat then when she came out in November, she was greeted by a small group of admirers and workers. The mast was stepped, and she was lifted up enough for Jon to get some bottom paint on the squares where she’d been resting on the trailer’s pads. In attendance were the Composites class guys and Kelsey, who had worked on the boat, a clutch of folks from IYRS, the senior Composites guy, Taylor Rock, Program Director at NYC and sailing coach at Rogers High School, and a few interested bystanders.

The lifting slings were installed inside the boat and she was otherwise prepared for launching. In the first moment of truth, she was lifted up off the trailer, swung around and lowered into the slip. Stephan, the club’s dock master, climbed aboard to disconnect the slings and reported there was no water inside. So far, so good

Once she was in the water and moored, Jon Bixby readied a bottle of champagne. Always mindful of the traditions of those who go down to the sea in ships, Jon had found the prayer to be used at the christening. Struggling with the small size of the print on Jon’s phone, I read the prayer and Jon did the deed with the champers.

Next aboard was Kelsey, to inspect her work and over whose shoulder was Robert Lacovara, the head Composites instructor at IYRS who, after a few minutes inspection pronounced the work as A+. As the gathering dispersed, I was chatting with Jon about a few things and remarked on the boat’s name. I could not figure out the connection. “How appropriate,” I thought, when he said he’d named the boat Kate in honor of Kate Wilson. 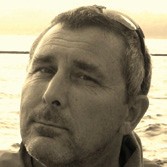 Australian born, Joe ‘Coop’ Cooper stayed in the U.S. after the 1980 America’s Cup where he was the boat captain and sailed as Grinder/Sewer-man on Australia. His whole career has focused on sailing, especially the short-handed aspects of it. He lives in Middletown, RI where he coaches, consults and writes on his blog, joecoopersailing.com, when not paying attention to his wife, college senior son, dog and several, mainly small, boats. The cats have, sadly, crossed The Bar.